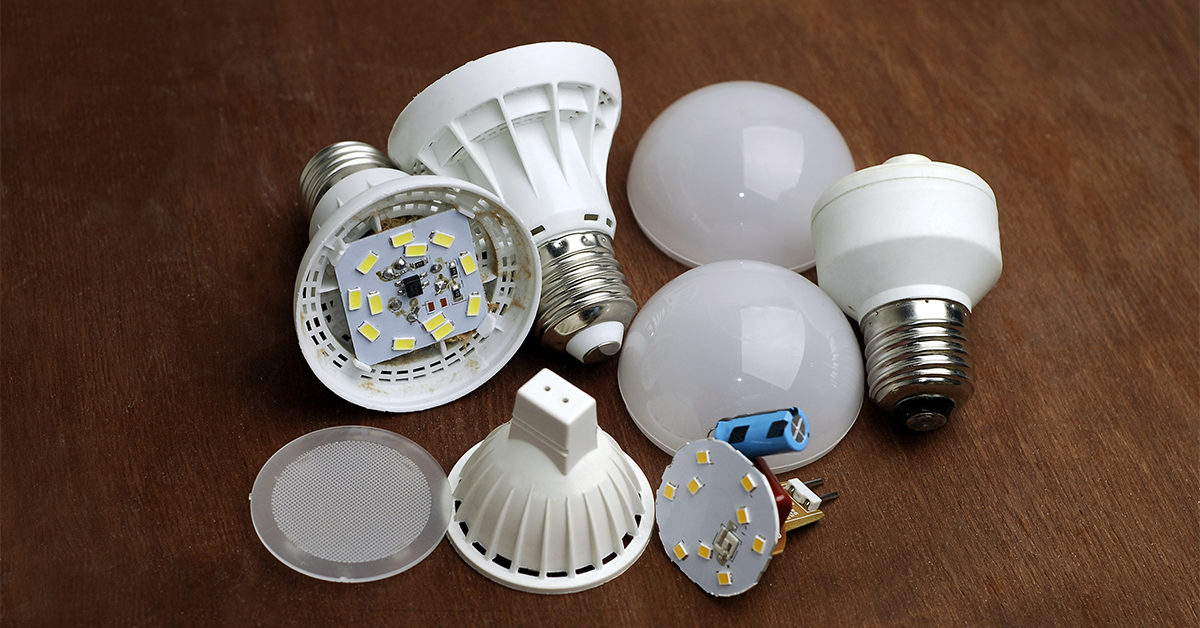 What is a Light Bulb Made Out Of?

There are technically hundreds of kinds of different light bulbs. They’re all made of different things, and they all work in different ways. If you’ve ever wondered what a light bulb is made of and how it works, you’re going to get a variety of answers.

Each of these lights are made of different materials, and they work in different ways.

Incandescent bulbs were the first ever light bulbs. If you heard the whole Thomas Edison story in school, these are the light bulbs he helped to invent. The real story is a lot more complicated than that, and it involves many patents and dedicated scientists and inventors that culminated into the modern light bulb. Their final collaborative design is the one we’ve been using for almost a century and a half.

Incandescent bulbs are made of glass. The inside of the bulb is filled with an inert glass. In some cases, all the air is removed to create a vacuum instead of an inert gas. The effect is the same. The wires inside use electricity they receive from the lamp or fixture to heat a special coil made of a material called tungsten. This coil is also called the filament of the light bulb.

When the electricity rapidly heats the tungsten filament, it begins to glow. This contained heat is what creates the bright light from a light bulb. The reaction is very similar to the way a bonfire can light up a dark night, but the reaction is more efficient and contained within the bulb.

Incandescent light bulbs have always been cheap and easy to manufacture. They’re versatile, and they work with any kind kind of lighting fixture. The only problem with incandescent bulbs is that they aren’t very energy efficient. Since many countries are driving to push their energy consumption to lower levels, many manufacturers have stopped producing traditional incandescent bulbs.

Now, incandescent bulbs are mostly decorative bulbs. If you’ve ever seen clear light bulbs with all of the components visible, they might look a little more complicated than the incandescent bulbs you know. These aren’t actually made of anything different. Edison bulbs, as they are often called, utilize all the same components of a traditional incandescent bulb. They’re simply arranged to look prettier.

Fluorescent lights work completely differently from traditional bulb shaped incandescent light bulbs. These light bulbs create light through a process called fluorescence, which is a rather loaded concept in physics. The simplest explanation is that fluorescence is a kind of electromagnetic radiation that creates visible light.

The glass tube or spiral is coated in a kind of powdered phosphorus, which is a naturally occurring mineral. It’s something you need in your diet to stay healthy. This doesn’t mean you should eat your light bulbs. Please don’t. It just goes to show the versatility of the minerals produced by the earth.

The inside of the tube is filled with argon gas and mercury vapor. Mercury is a naturally occurring metal that is very dangerous. It’s inherently poisonous to humans and dangerous for the environment. If you ever break a fluorescent light bulb, you need to be sure that you’ve thoroughly and safely cleaned all of it up. Dispose of it according to your local regulations. This prevents your family and the planet from coming into contact with mercury.

Both ends of the light bulb’s tube are fitted with metal electrodes that have been coated with alkaline earth oxide. This oxide gives off electrons easily. Electrons react when the electricity to the light is turned on, and these electrons ionize the gasses inside of the tube. They emit ultraviolet radiation, just like the gas reaction on the sun.

LED bulbs can be made of plastic or glass on the outside. The inside is fitted with special diodes that produce light. These diodes are made of conductive material. They take power from the source and the photons inside of the diode move around, creating a reaction called electroluminescence. The simplest explanation is that LED bulbs convert electricity directly into light without any byproducts or complicated reactions.

Boundery’s EBULB is an emergency LED light that stores electricity in its own reserve. It can sense when the power goes out and utilize the power stored within the bulb to keep the light on for a few hours.

Environmental concerns are growing. People are trying to use less energy and burn less coal. They want to reduce emissions and the introduction of harmful gasses and metals into the environment. Poor practices only contribute to global warming.

About 95% of an LED light bulb is recyclable, and since they last tens of thousands of hours longer than other light bulbs, they won’t need to be recycled often. They’re also the most efficient at creating light with minimal electricity, since they don’t have to facilitate any complex reactions to get from point A to point B. They simply generate light from their diodes.

Using less electricity means creating less emissions. The carbon footprint of the average LED light bulb is very small. Throughout the life of an LED light bulb, the emissions are the equivalent of driving about 40 miles in an average, non-eco friendly sedan. The equivalent for a fluorescent bulb is about 190 miles.

The simple answer to the question is that new light bulbs are made of light emitting diodes. They don’t use gasses or tungsten filaments. They don’t generate heat or create complex chemical reactions to turn radiation into visible light. They’re actually a lot simpler and more efficient than they ever were before.

As time goes by, you’ll be less likely to see traditional light bulbs. They’re effectively being phased out by newer and more efficient LED bulbs that are better for the environment and cost less to use. That’s why Boundery exclusively makes LED light bulbs. They’re the newer, more efficient, and more environmentally friendly way to illuminate a space, and we hope you let us illuminate yours!