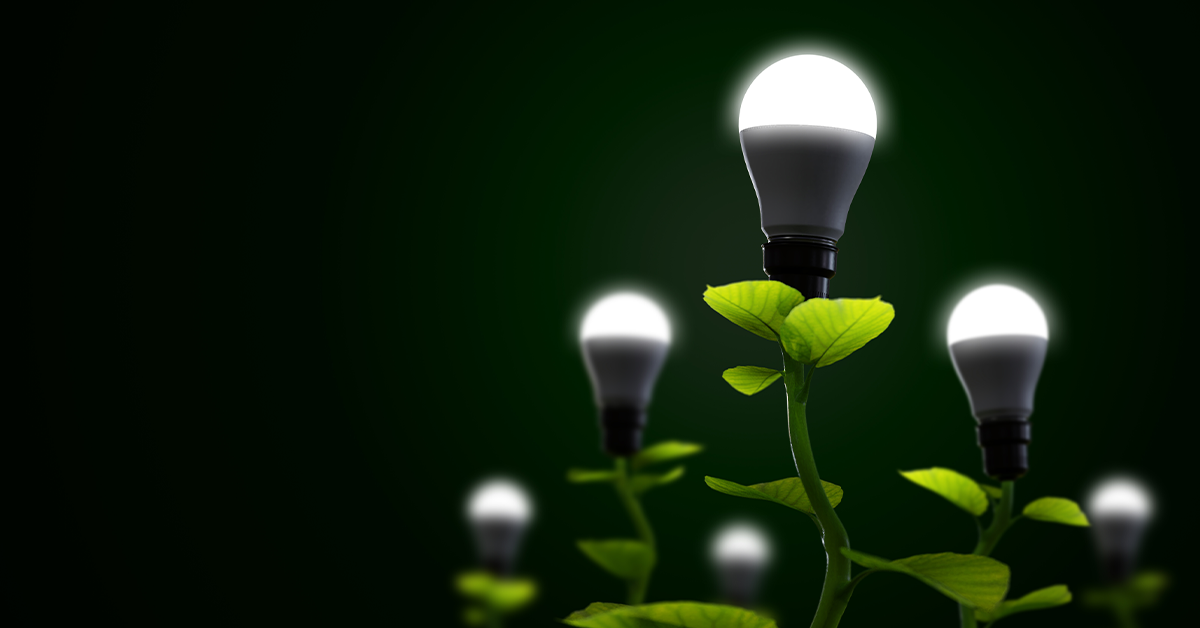 LED Lights: Are They Recyclable?

As we begin to use light emitting diodes, also known as LED lights, within our homes, we may begin to think of what we will do when the lights eventually fail.

While the life expectancy of LED lights is expected around 25,000 operating hours, or 20 to 25 years, we may assume we don’t have to worry about this issue quite yet, but we also don’t want to fill our homes with products that would later have a negative impact on nature or society.

LEDs can be found as replacement light bulbs in all shapes and sizes, but more importantly, LEDs have found a massive use as outdoor lighting due to the reduced power needed to create light.

All of those solar lights you see as you drive down the road lining driveways, walkways, and decks are likely being powered by the sun and lit by light emitting diodes. This is due to the LED only requiring 4 to 8 Watts of energy to produce the same light output as a 60 Watt lightbulb.

Many dim decorative outdoor lights are able to run off 1 to 3 Watts of power, meaning the charging and storing of power into a small internal battery becomes a possibility.

Most light bulbs on the market, including fluorescent, halogen, and incandescent require some form of recycling as they burn out over time. These light bulbs contain metals and elements which could be harmful to nature if released. These light bulbs are expected to last 1200 to 2000 workable hours depending on the surrounding conditions, meaning many of them will need replacing yearly, which over time and as a society, creates a large mass of waste.

This mass of waste, added with the toxic nature of the waste itself, creates a large need for recycling and regulation, along with a search for something better. While some places around the world have strict requirements on the recycling of objects such as light bulbs, gaining an understanding as a whole allows us to recycle more and do better for the environment.

While these large lighting sources can be recycled, can small LEDs be recycled?

Generally, when we consider an LED light bulb, we think of a cluster of multiple small light emitting diodes along the surface of the shell in the shape of a traditional light bulb, the design and components of the lighting source are very different.

As of 2012, only 8% of light sales within the U.S. were made on LED lights, while in the year 2019 the market had taken off and 75% of lighting sales were made on LED lights. Even with such a rapid growth, LED lights make up only 2% of trash currently being collected. It is thought that with the life expectancy of the LED lights and the idea that a standard household has 40-60 light bulb sockets, these lights may make up upwards of 20% of the trash over the next 10 years. This encourages the idea that recycling will be a must for the future.

When standard light bulbs are sent to recycling, the focus is to remove the harmful components such as lead and mercury. These are separated from the simple metals such as steel and the glass. The metals will then be melted down, and the glass ground into a powder, which is formed and melted to be used again. Standard light bulbs are considered hazard materials and should be disposed of with care.

Glass itself is a great substance to recycle. To create glass, you start with a powder which is melted down. To recycle glass, you grind the glass down to a powder and melt it down. This glass can be run through the grinder multiple times without changing its physical makeup, meaning we can utilize this as a constantly recurring product.

When considering the possibility for reusable products, you should always consider the initial use as well. LED’s are known to last 21 times longer than a traditional light bulb, and can save 87 to 90 percent on power usage. The initial use to start with has already come as a far better product for our environment.

LEDs avoid using harsh chemicals or toxic metals during construction, and are not considered to be hazardous materials. This is why they are loosely regulated unlike common light bulbs. These safer substances are already safer for our environment, but also if they were to get thrown in the trash, it wouldn't have as drastic of an outcome.

When recycling an LED, up to 95% of the light emitting diode is able to be recycled and reused, meaning even once a product has been used until it is burnt up, it can be remanufactured and recycled to be used again.

When recycling LEDs, regardless if you are trying to recycle small individual lights similar to the ones used in holiday decorations, or clusters of LEDs found in indoor and outdoor lights, you should always call your local recycling facility to ensure they are able to appropriately dispose of LEDs.

Consider wrapping your LED lights in newspaper. This is something often done with normal light bulbs to avoid glass or toxic chemicals being exposed if a lighter were to break, and while LEDs do not have toxic chemicals, this is a great cost effective way to maintain broken glass shards.

Another option for recycling LED lights is the “mail-in” options. With companies specializing in LEDs, they often become the best equipped to tear the lights down and start again. Many of these companies are willing to send you a reinforced envelope to return the lights within. This option ensures that the lights get returned to an appropriate reusable source, and they avoid getting mixed in with the standard light bulbs.

The Future of Recycling LEDs

Although options for recycling light emitting diodes may seem fairly limited depending where you live, we should expect growth and company buybacks in future as far as recycling is concerned.

With a growth of sales over 79.5 million sales over a 5 year period, and the life expectancy of the LED light bulb being 25,000 hours or 15 to 25 years depending on the usage, we can expect to see a massive increase in LED waste over the next 5 to 15 years.

Many consumers have found themselves quite satisfied with using LED products in and around their homes, with light bulbs lasting on average 21 times longer that a standard incandescent, and while LEDs may cost 5 times more than a standard lightbulb, the reduction of 87 to 90% of power consumed by lighting turns out as a pleasant outcome on the power bill.

With LEDs bringing a great deal of consumer satisfaction, they are a lighting source that is here to stay. With a long life span, we will soon understand what needs to be done in order to more appropriately recycle light emitting diode bulbs.