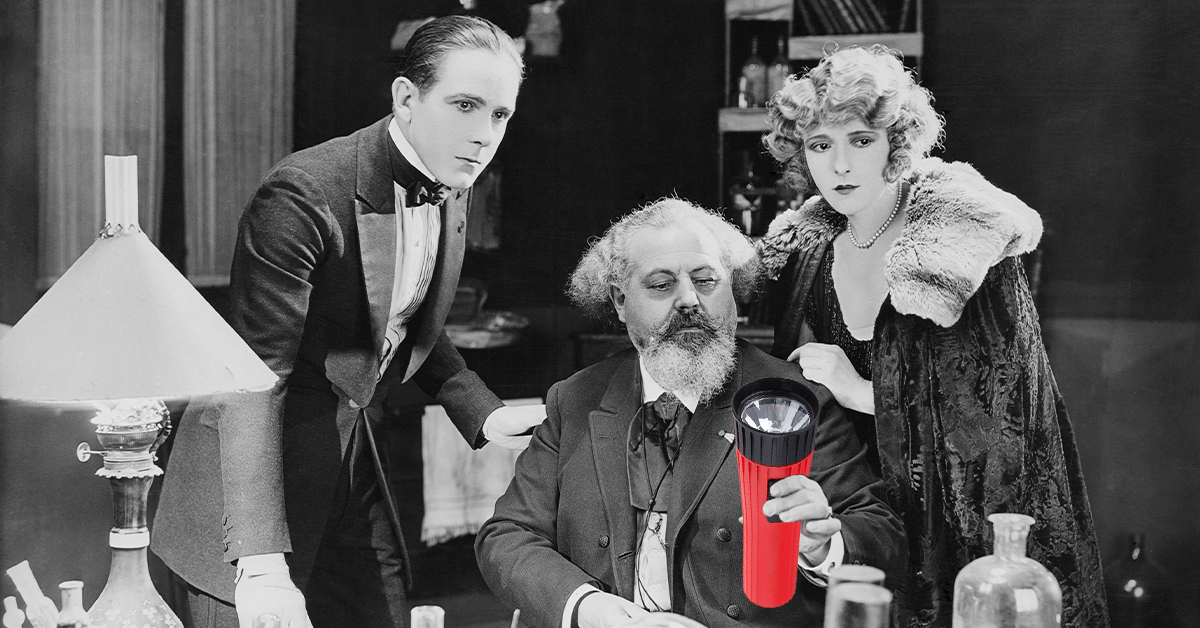 When Was The Flashlight Invented?

Before flashlights were invented what did people do for lighting in the dark? Common usage of fire for lighting is estimated to be about 420 million years ago. As traditional fire evolved there were usage of torches, candles, and even gas lamps that people could make lighting more portable instead of only lighting the area that the large fire was located. While fire and its natural light was great, it also had some negatives. One being that fire can be dangerous and can spread. If not treated properly fire could catch people’s homes on fire and their land outdoors. The dangers of fires encouraged people to look for alternative solutions for a portable lighting source.

History of The Flashlight

The flashlight came after the invention of both the light bulb and the battery. In order for the flashlight to be portable it needed the invention of the battery which allowed it to hold a charge and be turned on and off. The first dry battery was created in 1896 and was perfect for a flashlight. It is actually called a flashlight because it only would stay on for a short period of time before it needed to rest. As time passed the flashlights became more efficient and took on new shapes including lanterns and pocket sized portable lights. Now with the development of LED lights they are very affordable and powerful to give you the light you need. The history of flashlights has come a long way and has vastly improved its technology.

Flashlights have many different forms from incandescent flashlights, to flood flashlights, and even LED flashlights. While all of these lights may seem different they all work in the same manner. The flashlight consists of a bulb, a switch, and a battery. A flashlight works by having stored energy in the form of electrons in the battery. When the switch is placed in the on position it completes the circuit which allows the energy to flow through the bulb. When electrons are passed through a bulb they emit particles called photons. The more photons a bulb emits the brighter the light. LED bulbs are great for this application because they emit the most number of photons per unit of energy supplied.

This may seem obvious but many people often forget to bring a flashlight or put it on their packing list in the first place. You may think that you can rely on the flashlight on your phone, but truthfully it is most likely not bright enough. Having a powerful flashlight for any outdoor adventure like camping, hiking, or biking is essential. You will also need a flashlight that is waterproof and is able to withstand the elements. The last thing you want is to be stuck outside at night in the rain with no source of light. The Haylo HD 2800 2.0 Deluxe flashlight by Boundery is the perfect choice. It is lightweight, offers 1,000 lumens of light, is waterproof, and more. Choose your flashlight wisely when looking for the perfect outdoor adventure tool.

Hurricane season is approaching and many other emergencies are possible including fires, tornadoes, and snow storms. With these you never know when the power may go out and you may need to evacuate or shelter in place. When preparing for an emergency you will want to have an emergency kit with food for at least 14 days,water, a can opener, clothes, a flashlight, and extra batteries just in case. You will want a flashlight that is bright enough to illuminate a large space and will run for many hours. Emergencies are definitely a time that a flashlight is needed.

Sometimes in your free time you want to spend it doing a passion project. This may be building a new piece of wood work or working on the car that you purchased just for fun. No matter the project, it can take you into the night since you are in the zone and doing what you love. In times like these you may not have adequate lighting and could definitely use a flashlight. The magnetic worklight is perfect for times like these and can be magnetized to your tool box, it also has a kickstand if you don’t have a magnet.  Even if it is to make the small details easier to see in the day time, your eyes will definitely appreciate the help.

Before flashlights were invented there was a need to see in the dark. Beginning with fire and gas was a great first step, but as time went on the technology was greater and greater. Today, flashlights hold a special place in the home, car, and during adventures and are a necessity for everyone to have.